TORONTO, Nov. 18, 2019 /CNW/ - Denison Mines Corp. ("Denison" or the "Company") (DML: TSX; DNN: NYSE American) is pleased to announce that it has entered into an agreement with Cantor Fitzgerald Canada Corporation as a sole bookrunner and lead underwriter, on behalf of a syndicate of underwriters (together, the "Underwriters"), under which the Underwriters have agreed to purchase, on a "bought deal" private placement basis, 6,030,000 flow-through common shares (the "Flow-Through Shares") at a price of CAD$0.68 per share, for total gross proceeds of approximately CAD$4.1 million (the "Offering"). View PDF version

David Cates, President and CEO of Denison, commented, "This financing is expected to fund the Company's share of exploration expenditures in 2020, which are likely to be focused on the Company's 90% owned Wheeler River project and involve further exploration around and delineation of the high-grade Phoenix deposit.  Potential to add additional resources at Phoenix exists outside of the currently defined extents of the deposit – particularly around Zone B, where previous mineralized results remain open on section or the interpreted optimal exploration target remains untested, and at Zone C, which is not currently included in the mineral resource estimate, where similar targets exist. With several positive results returned from recent In-Situ Recovery ('ISR') field tests carried out at Phoenix, our confidence in the ISR mining method is increasing and we believe the time is right to go back to Phoenix and delineate the full extent of the mineralization, which will ultimately inform our mine planning activities and be incorporated into a future feasibility study for the project."

The Company has granted the Underwriters an option to increase the gross proceeds of the Offering by up to 15% (the "Underwriters' Option"), exercisable in whole or in part at any time up to two business days prior to the closing date. The Underwriters will seek to arrange for substituted purchasers for the Flow-Through Shares in one or more provinces of Canada.

The closing of the Offering is expected to occur on or about December 6, 2019 and is subject to the completion of formal documentation and receipt of regulatory approvals, including the approval of the Toronto Stock Exchange and the NYSE American. The Flow-Through Shares issued in connection with the Offering will be subject to a statutory hold period in accordance with applicable securities legislation.

Denison is a uranium exploration and development company with interests focused in the Athabasca Basin region of northern Saskatchewan, Canada. The Company's flagship project is the 90% owned Wheeler River Uranium Project, which is the largest undeveloped uranium project in the infrastructure rich eastern portion of the Athabasca Basin region of northern Saskatchewan. Denison's interests in Saskatchewan also include a 22.5% ownership interest in the McClean Lake Joint Venture ('MLJV'), which includes several uranium deposits and the McClean Lake uranium mill, which is currently processing ore from the Cigar Lake mine under a toll milling agreement, plus a 25.17% interest in the Midwest deposits and a 66.51% interest in the J Zone and Huskie deposits on the Waterbury Lake property. The Midwest, J Zone and Huskie deposits are located within 20 kilometres of the McClean Lake mill. In addition, Denison has an extensive portfolio of exploration projects in the Athabasca Basin region.

Denison is engaged in mine decommissioning and environmental services through its DES division, which manages Denison's Elliot Lake reclamation projects and provides post-closure mine and maintenance services to industry and government clients.

Denison is also the manager of Uranium Participation Corporation, a publicly traded company listed on the TSX under the symbol 'U', which invests in uranium oxide in concentrates ('U3O8') and uranium hexafluoride ('UF6').

The disclosure of scientific and technical information regarding Denison's properties in this news release was prepared or reviewed by Dale Verran, MSc, P.Geo., Pr.Sci.Nat., the Company's Vice President, Exploration, a Qualified Person in accordance with the requirements of NI 43-101.

Generally, these forward-looking statements can be identified by the use of forward-looking terminology such as 'plans', 'expects', 'budget', 'scheduled', 'estimates', 'forecasts', 'intends', 'anticipates', or 'believes', or the negatives and/or variations of such words and phrases, or state that certain actions, events or results 'may', 'could', 'would', 'might' or 'will be taken', 'occur', 'be achieved' or 'has the potential to'.  In particular, this news release contains forward-looking information pertaining to the following: the Company's expectations regarding the proposed Offering, including the completion and use of proceeds thereof; exploration, development and expansion plans, objectives and regulatory processes; and Denison's percentage interest in its properties and its plans and agreements with its joint venture partners, as applicable.

Forward looking statements are based on the opinions and estimates of management as of the date such statements are made, and they are subject to known and unknown risks, uncertainties and other factors that may cause the actual results, level of activity, performance or achievements of Denison to be materially different from those expressed or implied by such forward-looking statements. Denison believes that the expectations reflected in this forward-looking information are reasonable, but no assurance can be given that these expectations will prove to be accurate and results may differ materially from those anticipated in this forward-looking information. For a discussion in respect of risks and other factors that could influence forward-looking events, please refer to the factors discussed in Denison's Annual Information Form dated March 12, 2019 under the heading 'Risk Factors'. These factors are not and should not be construed as being exhaustive. 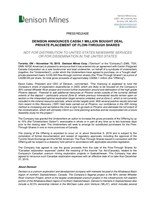